This guide is intended for merchant/issuer app developers familiar with the Android programming environment and APK ecosystem. In accordance with the applicable Samsung partner agreements, it covers the setup and use of the Samsung Pay SDK for purposes of integrating the Samsung Pay app with partner apps developed by both merchants and payment card issuers for Samsung devices and is intended for no other purpose. The use cases and corresponding code samples included are representative examples only and should not be construed as either recommended or required. For APIs and sample code reference, the latest Javadoc of the Samsung Pay SDK is recommended.

Please be aware that, due to regulatory restrictions in different countries, certain Samsung Pay APK behavior designed for one country may not be identical to one for another country. Always use the Samsung and Samsung Pay documentation applicable to the market you are working in and test your integrated project in accordance with the guidance provided for that market/country.

Understanding and using the SDK

To integrate your partner application with the Samsung Pay SDK, the following components are included your SDK download:

The following diagram shows a high-level architecture revealing the general interactions between the Samsung Pay SDK and a partner app.

Viewed at this level, the partner apps leverage the Samsung Pay SDK to perform the operations shown ― push provisioning and opening Favorite Cards for issuers; online payments for merchants ― with Samsung Pay. The key components involved are:

The main classes comprising the Samsung Pay SDK include:

The most common In-App (online) payment use cases take the following form:

The most common App-to-App (also referred to as App2App) use cases can be divided into three categories:

The push provisioning use case ― adding payment cards to Samsung Pay from the card issuer’s app ― typically takes this form:

The importance of maintaining a good development environment cannot be overstated. For integrating the Samsung Pay SDK with your partner app, the following prerequisites and recommendations help ensure a successful SDK implementation.

Use the following snippet to determine the OS version running on a device and whether or not to display the Samsung Pay button in your partner app.

To develop a Samsung Pay SDK service, merchants and issuers need to register for an account with Samsung Pay Developers in order to create the appropriate service type for their applications. Here are some helpful links inside the portal:

Be sure to do the following before attempting to use the SDK:

The SDK package has the following directory structure:

If your app(s) have any issue with ProGuard, the following rules are recommended:

When DexGuard is employed, the following additional rules apply:

From Android R OS (if the target SDK version is 30), you must include the following <queries> element in the Androidmanifest.

As of SDK version 1.4, enhanced version control management has been introduced to improve backward compatibility and handle API dependency from country and Service Type. For example, if a partner integrates the latest SDK―for instance, API level 2.17―but continues to use APIs based in level 1.4, the partner app remains compatible with Samsung Pay apps supporting API level 1.4 without the necessity of upgrading the Samsung Pay app.

The chief characteristics and properties of the API level include:

Implement the following usage in your 'AndroidManifest':

Apps configured for one of two modes can be registered in the Samsung Pay Developers site for the purpose of integrating Samsung Pay functionalities.

Debug mode
To enable debug mode, you must add debug_mode and spay_debug_api_key to your AndroidManifest.xml file. The spay_debug_api_key is generated by the Samsung Pay Developers portal when you create a new In-App payments service.

The spay_debug_api_key is valid for 90 days and can be updated on the Samsung Pay Developers portal.

Release mode
To enable release mode, set debug_mode = N in your AndroidManifest.xml file.
With release mode enabled, your partner app is verified by its signature instead of a spay_debug_api_key, and there is no time limit.

Depending on the mode configured—Debug or Release—verification of your registered app and service by the Samsung Pay SDK and its Developers portal entails version and eligibility checks to determine device and app compatibility. Likewise, your app needs to verify the presence of the Samsung Pay app on the device, its status, and whether or not its version is sufficient to support your implementation of the SDK. 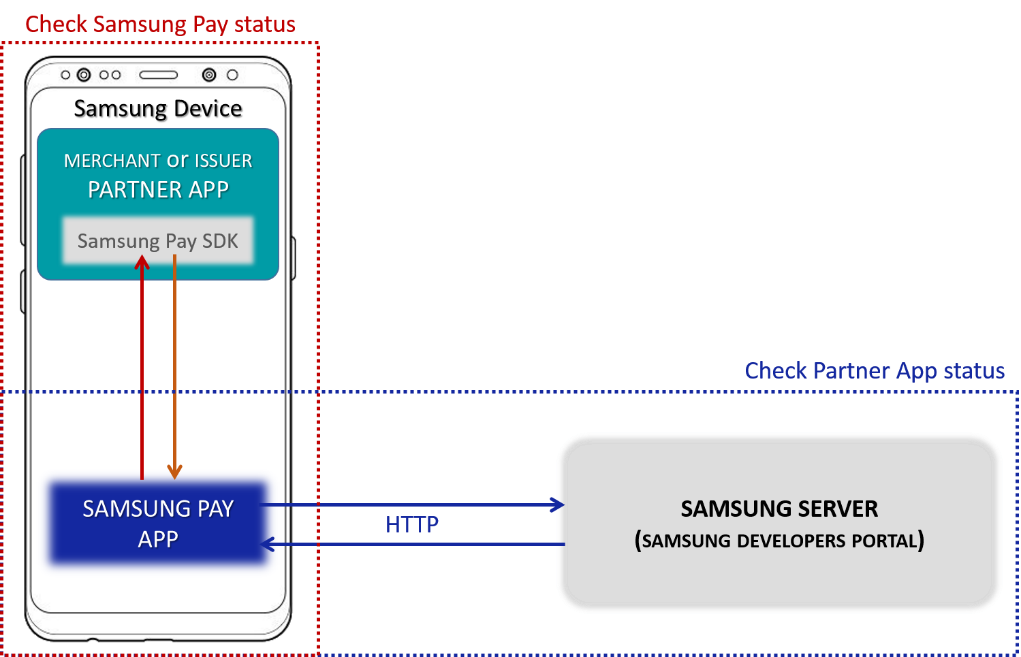 The debug mode set in your Partner app allows for simplified verification as shown in the following table.