Key players in the blockchain industry: User, Wallet and Node In the blockchain industry, there are a few important key players: User, Wallet, and Node.

The User can use the blockchain technology to send or receive cryptocurrencies. A user can be an active user of blockchain-based applications, also known as DApps (Decentralized App) to raise a crypto asset, like a cute character in a game. The User may also post an interesting article on a blockchain-based SNS, where the user gets credits for the number of likes or comments from other users.

One of the key components of a transaction is a user’s signature. A wallet must be able to sign a transaction with the user’s private key. Some wallets generate a key pair in the wallet by itself and sign the transaction upon user’s request. Some may not generate the key pair itself, but instead, support the use of a separate hardware wallet, which will store the key and complete the signature part of a blockchain transaction. Nevertheless, because there is a fee that must be paid in order to write on the ledger of the blockchain network, a user’s signature that implies that the user has checked and approved the fee, cannot be emphasized enough.

Lastly, when a wallet or a DApp submits the signed transaction to the blockchain network, nodes, similar to server, checks the validity of the transaction and use a consensus protocol to agree whether to include the received transaction in the ledger or not. If it is included, then the transaction is now shared to everyone participating in the network. Because there is no centralized server that controls the network in blockchain, it is impossible to cancel or reverse a transaction that has been submitted to the network. Hence, the biggest challenge that the wallets and DApps face is how to sign a transaction safely. To sign a transaction, a user’s private key is needed. In other words, the user’s private key is what must be kept in a safe place. Moreover, the execution environment, where the signing is happening, must be also safe.

Hardware wallets also have a separate secure display to get user’s confirmation of the blockchain transaction. The information shown by the hardware wallet’s screen is independently displayed from the host that it is connected to, such as the computer. The user can create a new key pair (public and private key) or import an existing one that was created from other wallets. More specifically, Samsung Blockchain Keystore supports BIP-39 (Bitcoin Improvement Proposal) standard, and is a HD (Hierarchical Deterministic) Wallet. More details will be covered in the Key Management section. 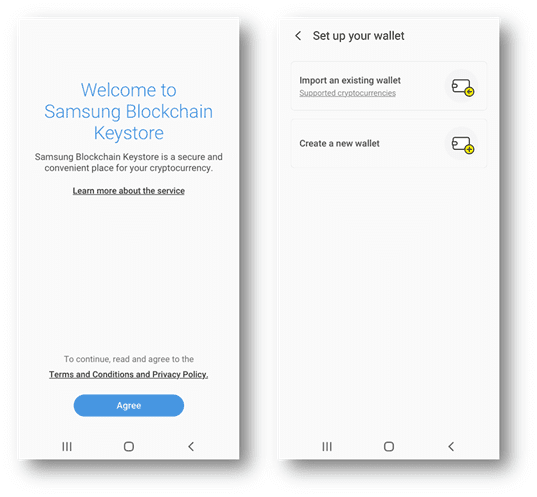 In the set up page, “Create a new wallet” means generating a Root Seed, that can derive both a public key and a private key used to make Blockchain-based transactions, payments or contracts in Decentralized Apps or other wallet services that have integrated with Samsung Blockchain Keystore.

Because this Root Seed is about 128 to 256 bits of 0 and 1, and is not friendly to read nor remember, 12 to 24 words of recovery phrase can replace the Root Seed. Anyone who knows the Recovery Phrase can access and sign the blockchain transactions.

So the user will need to write down the 12 words and make sure not to lose it. Note that once the process is complete, Samsung Blockchain Keystore will NEVER ask the user to enter all the words again. “Import an existing wallet” means the user already has 12 to 24 words of recovery phrase, created in Samsung Blockchain Keystore on a different device, or from other wallets that support BIP-39 standard. Once the user enters the correct words of recovery phrase, the wallet will be imported and the set up process is complete. Likewise, once the process is complete, Samsung Blockchain Keystore will NEVER ask the user to enter all the words again. During the process of setting up a wallet, the user will need to set up a six-digit PIN to protect the crypto assets. A PIN is a verification method for cryptocurrency transaction, payment and smart contract in Samsung Blockchain Keystore-integrated services.

The PIN or Fingerprint will be asked every time a user wants to sign a blockchain transaction, check confidential information, like the Recovery Phase, or change PIN. The user can change the PIN, enable or disable fingerprint as an authentication method, check Recovery Phrase and reset Samsung Blockchain Keystore. Other things, such as setting alarm notifications or connecting to a channel to send questions or comments to Samsung Blockchain team can be found here as well. 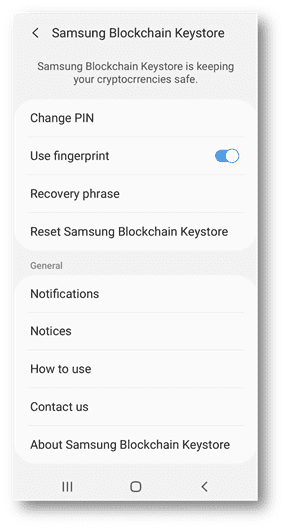 What will be covered?

Throughout this site, we will look deep into the Samsung Blockchain Keystore. The following items will be discussed.