Temperature control and the balance between performance and power management is always a complicated task in Mobile game development. In this article, we are going to show how to make the ideal solution for power management and performance optimization by using Unity’s “Adaptive Performance”. What’s more, we will show how Adaptive Performance works on real in-market game, Call of Duty Mobile, a First-Person shooter which aims to match the full quality of the famous PC original.


We will discuss what developers can achieve by using Adaptive Performance and how to use it to develop your own optimization solution for your game learning from the example in Call Of Duty Mobile.


The first step with any new project is to get an idea of where we currently are. The final target is to provide a predictable frame rate and a decrease in thermal buildup, enabling longer play times and a much more enjoyable player experience while at the same time preserving battery life.

Initially, Call of Duty Mobile was using the Android default solution to manage the thermal throttling situation on Samsung devices. So as a first step, we integrated the default Adaptive Performance package from Unity which only contained a simple solution that can adjust CPU/GPU frequency. As we can see below, Adaptive Performance immediately provided a slower temperature increase and better FPS stability while maintaining the target of 60 FPS. However, there is always room for improvement and with our goal of pushing the limits even further, boosting overall performance with limited temperature, work would begin in earnest!


Along with establishing performance, there were some other areas that required investigating.


Let’s see some screen captures from this game: 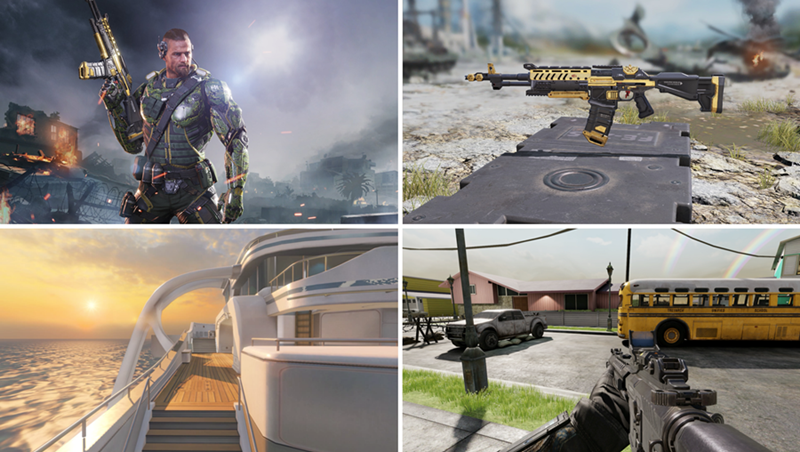 We can see Call of Duty Mobile has PC-like rendering quality, the game is using PBR material with high resolution textures, this will create a heavy work load on both the CPU and GPU. So it seemed likely that adjusting only CPU/GPU frequency automatically would not be enough to avoid Thermal Throttling and consequential performance degradation. We discussed with the Call of Duty team the idea of making multiple types of scalable quality factors, and of course these were confirmed with the Art designer and Project Staff of the game to make sure the adjustments of these factors did not impact the game experience. The scalable factors for Call of Duty were:

Adaptive Performance is built on top of Samsung’s GameSDK which can provide you with feedback about the thermal state of mobile devices. Developers can subscribe to events or query the information from the Adaptive Performance API during runtime to react in real-time.

Left to its-self the mobile device will trigger an immediate reaction to deal with high surface temperature by throttling chip frequencies, which naturally will cause the performance to drop. 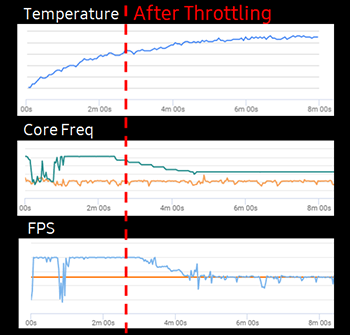 
CPU and GPU cores are actually less efficient when run at their maximum clock speeds. The API ‘setLevelWithScene(String scene, int cpuLevel, int gpuLevel)’ limits the maximum allowed clock speeds which can avoid situations where the operating system throttles the frequency of the CPU and GPU to cool down the device.

Applications can determine cpuLevel and gpuLevel which range from 0 ~ 3 based on the thermal feedback provided by the Adaptive Performance API and can use some special knowledge of the application like:

Depending on the game and scenario, Developer can react differently when the game is CPU or GPU bound according to the thermal state changes.

Optimization Solution as implemented in Call of Duty Mobile


The Scaling Factor did not greatly impact the CPU / GPU power consumption, but can obviously reduce the thermal problems by adjusting power use before Thermal Throttling occurs, the game can get the device statuses by using Adaptive Performance, and reduce rendering details to control the heat.


Here are the detail rendering factors for Call of Duty Mobile, and of course, the adjustment will not impact the game experience:


In every game frame, we performed bottleneck detection and analyzed the temp trend to decide how to update CPU/GPU level.

According to the temerature of the game, from low to high, We divided the game into three stages “Normal”, “NearThrottling”and “CloseThrottling”.The algorithem of each is totally different:

This is the FPS compare result from 3 battles of BR mode in Call Of Duty Mobile. As shown here the FPS with Adaptive Performance is much more stable and the average FPS is higher, about 7%.


As we showed above, we can make sure that there can be a clear benefit from using Adaptive Performance for real games. If a developer wants to maintain performance without allowing thermal throttling on a device and wants to provide a stable gaming experience with optimal visual quality on mobile, Adaptive Performance is by far the best solution.