Mobile devices have more physical limitations compared to PC’s and consoles, this means it’s more constrained when rendering complex games by comparison. The Adaptive performance project was started to improve the performance of these games under these stricter constraints on mobile devices.

To manage these constraints we implemented 3 features.


Power Manager(PM) was implemented to avoid thermal throttling which is suddenly dropping the performance when the device temperature is high and to extend battery time. To achieve these goals, the PM predicts the optimal CPU/GPU levels for the games needs and sets the hardware to those levels. 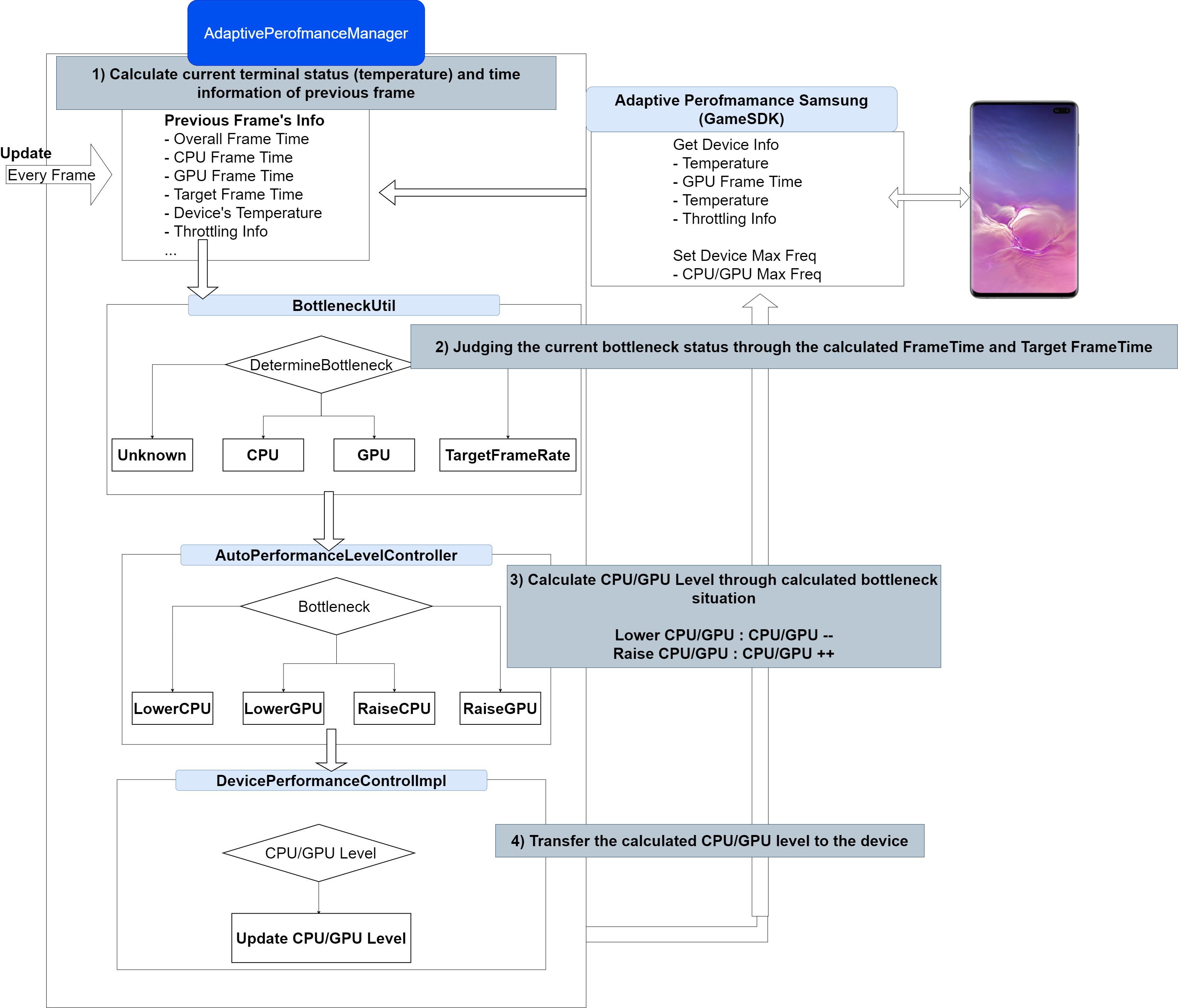 The graph above shows the structure of the Power Manager system and its workflows. The operation order of the PM is as follows.

While the game is playing on the device, Power Manager in Adaptive Performance repeats the above order and provides appropriate behavior for changing device situations.

Bottleneck detection is the process that identifies which component is delaying the overall rendering pipeline of a game. In Adaptive Performance, it finds Bottleneck points using Frame time and CPU/GPU time information. With this information we can narrow down whether it’s the CPU or the GPU that is stopping the game from reaching the target framerate. This is identified by calculating and comparing the CPU and GPU frame time with the overall frame time. In case of GPU time, more accurate information can be obtained through GameSDK and it makes it easier to find bottleneck points.

This way, once you know whether the CPU or GPU is causing the bottleneck, you can take appropriate action for each situation. For example if the GPU is a bottleneck then we can reduce the CPU level which will in turn lower temperature and vice versa if the CPU is the bottleneck you can lower the GPU level reduce the temperature for that component. If the device already has a low temperature, PM can also adjust the device to use the GPU as much as the game needs. In addition. If the CPU and GPU are surpassing the target framerate then we can reduce the CPU and GPU level to lower the power consumption, thereby increasing battery usage time.

Adaptive Performance provides an auto power management system like above. It is called Auto Performance control.

It is possible that developers can set the CPU/GPU levels by themselves using Adaptive Performance APIs, but it is NOT recommended.

What they can adjust directly is the abstract level value, not the actual operating frequency number as this may cause unintended battery consumption and performance degradation problems depending on the performance difference each device has. (For example, a certain level value set for device A may be adversely affected in device B for different reasons. )

Therefore, rather than setting the level directly by the developers, it is recommended to use the Auto Performance Control provided by the experienced developers of Unity and Samsung for achieving the best performance in any devices.

Again, this is NOT the recommended method. Note that even if the user sets the CPU/GPU level, the level value is not guaranteed to be applied or maintained due to device status or policy.


If game developers want to get not only Auto Performance Control with the Power management service but also an additional performance improvement then they can use the Custom Scaler.

The Adaptive Performance API notifies the temperature information of the current terminal through the warning level and provides more detailed temperature level . Through this, the developer can see the temperature change and throttling control time of the device with the Warning Level signal provided by Adaptive Performance. If the developer controls the quality scaling of the desired part by utilizing this timing information, it can preemptively manage the heat generation before the point of heat generation control of the terminal and allow the battery to be used for a long time.

The below example is an implementation sample that controls global LOD bias as a custom scale factor using temperature information.