Learn more by watching the videos after each step.

Step 1: Set up the Docker environment

Docker is a convenient and easy way to standardize an environment in a very lightweight Linux environment (usually Alpine Linux running in the Docker Engine) that contains all dependencies required to run a program. In this case, the Docker image provided is preconfigured to include Dis.co, discomp (Dis.co’s parallelization multi-processes API), and other image processing and quantitative libraries such as the cv2 (computer vision library), FFmpeg (video processing library), and numpy (scientific computing library).

The purpose of this lesson is to verify that the Docker Environment is setup correctly on the machine.

In Step 1, we provided a Docker environment that runs Python code with OpenCV, FFmpeg, and other scientific libraries such as numpy. In this lesson, we will provide an interesting example of how we can overlay eyeglasses onto a face detected in an image using these libraries.

Additionally, we have also added the Dlib library for supporting the face detection and face feature extraction (facial landmarks) based on machine learning. In our code, a pre-trained facial landmark detector and model (i.e., shape_predictor_68.dat) are added to estimate the location of 68 coordinates that map to facial structures on the detected face.

For further details on how the facial landmark works, refer to https://ibug.doc.ic.ac.uk/resources/facial-point-annotations/

Now, we have acquired a powerful tool to intelligently process and overlay our Dis.co shade onto a face detected in an image based on machine learning. The next natural step is how we can scale this to a video (i.e., a sequence of images) or even on hundreds of different streams of videos.

To handle video files, the FFmpeg library provided a very simple and easy-to-use interface to extract image frames from a video. Similarly, we can also create a video with image sequences with the same library.

To get started, we will first look into the lessons/lesson_3 folder.

As you can see, we have now provided the glasses_3.py and a short video clip called samsungfun.mp4 for you to test the work on. 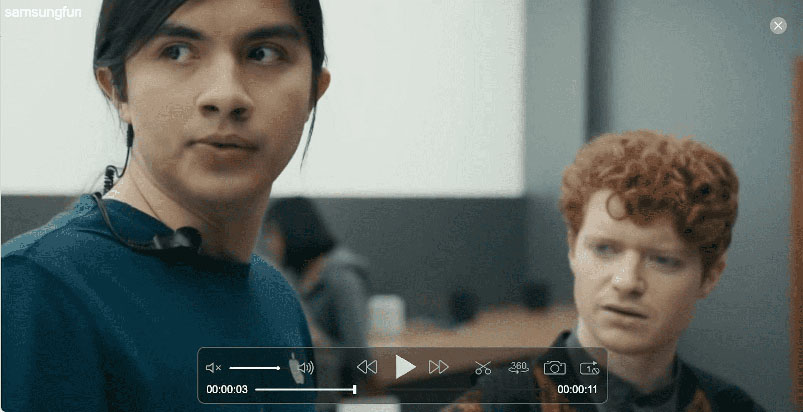 Now, let’s start by looking into the source code itself.

In the last two lessons, we have created pipelines to process images or videos with some of the state-of-the-art libraries and machine learning algorithms. However, as we may see quickly that these processes take a long while to analyze video footage, especially with high definition images and videos.

Here we introduce the Dis.co command-line interface (CLI). This is one of the easiest way to get familiar with the Dis.co interfaces that allow us to scale and offload the work to a dedicated cloud resource of your choice.

Use Dis.co to perform image processing on the cloud

Step 2 demonstrates a computer vision example of detecting faces, facial landmarks, and overlaying virtual eyeglasses onto a person’s face. In this lesson, we will offload the exact work to the Dis.co cloud and perform such remotely with only a few lines of code changes. More importantly, with the Dis.co’s serverless architecture, you can scale this to 100 or 1000 times without managing the resources or making any code changes on developer’s end.

In this demo, we have created a customized Docker image (with OpenCV, FFmpeg, and Dlib libraries pre-installed) that deploys by each agent running on the server. If desired, we can also setup GPU resources per server and scale even further for your jobs.

The Python script glasses_4.py provides a full-blown example of how Dis.co handles input and output on the server side.

Particularly, the Dis.co command takes the script glasses_4.py and the input image team.jpg, upload to the cloud server, and perform the processing remotely. During the executions, any data output to the ‘/local/run-result’ folder on the server side will be saved in our final result.

Upon successful execution, Dis.co packages the results in <job id>-<job name> folder, and we download the package back on the client side.

Step 5: Use Dis.co to perform video processing on the cloud

With the Dis.co platform, we can now send jobs across an unlimited number of resources (devices) without the pain of managing them. Basically, compute on-demand and scale as needed. In this part of the lesson, we will demonstrate how to parallelize the video processing pipeline by splitting the work into smaller clips that can be offloaded directly to Dis.co. For example, we can divide a ~4 minute video into 10-second clips, and process each clip in parallel and merge the results in a later step. Again, there is a trade-off on the granularity of the parallelization and it really depends on the use cases. Developers can examine this further by test running the solution with a small scale test.

Now, let’s explore how we can split videos with FFmpeg, and then how we can offload tasks to Dis.co and merge the results back.

Dis.co also supports multiprocessing API natively with Python. That means if you have prior experiences working with the Python MP, we can easily port the code to support MP with a single line of code changing.

This bonus lesson will demonstrate an analytics example of processing YouTube videos with the discomp APIs that work natively with your Python code.

Congratulations! You have successfully achieved the goal of this Code Lab activity. Now, you can run compute-intensive jobs and parallelize them using Dis.co by yourself! But, if you're having trouble, you may check out the link below.