Step 1: Testing out the base sample app

The base sample app uses the following classic simple approach for performance optimization:

Build and run base sample app

The result of the GPU Watch is that the performance is poor with only 8 FPS.

Barriers are needed to synchronize the GPU resource usage. On this section, try to modify the pipeline barriers to minimize the wait and improve the render pass logic. The shading passes in the showcase or sample app uses geometry textures which are generated at the previous step as seen in the figure below. Before using textures, the shading pass has to wait for all the writes to finish. The transition of resources between the textures and the shading pass is the barrier which we are going to focus on this section.

The base sample app uses full synchronization as a classic method for its optimization. This forces further stages to wait before execution. However, what we wanted is to reduce the waiting time by using more relaxed barriers as seen below. 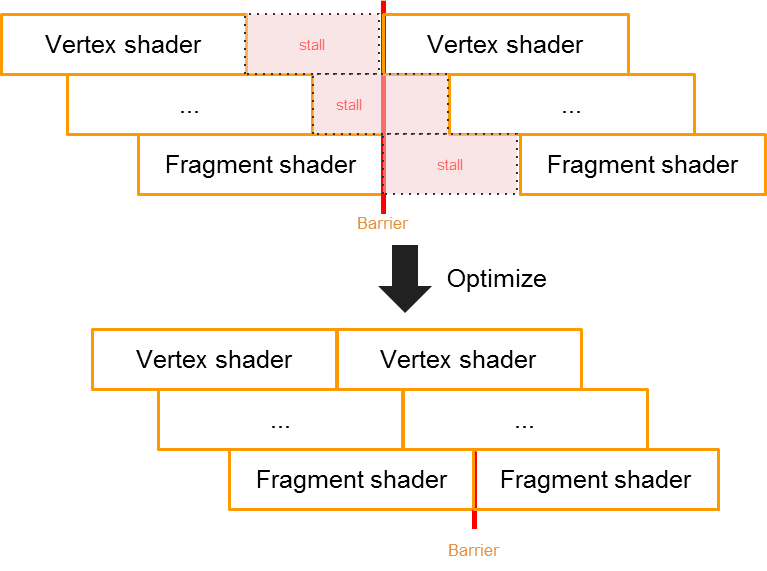 While running the app, you’ll observe that there has been a visual issue. There must be something wrong with the scenario and the rendering is broken. This may be due to overestimation with the barrier synchronization. In real world scenarios, visual artifacts can be more unpredictable and can be harder to debug. So barriers should be modified with these guidelines:

In this step, two things must be fixed: the broken rendering from the previous section and properly setting the barriers to optimize the app.

The image below has shown some improvement over the base version.

In a single pass, a new render pass is started for every output attachment but in multi pass, output attachments are grouped together with subpasses. With single pass, the pixels have to be written first to the texture and read back in every render pass, which is resource expensive. In multi pass, the pixels are transferred inside local memory and written to texture only once at the end.

In this Code Lab, two optimization cases were implemented and examined for rendering with Vulkan API. In summary, the proper pipeline barrier usage increased the performance by about 15%. Moreover, changing rendering approach to multi pass improved the performance by 500% and reduced total GPU load to about 70%.

Learn more by watching the video

Congratulations! You have successfully achieved the goal of this Code Lab activity. Now, you can optimize game rendering with Vulkan by yourself! But, if you're having trouble, you may check out the link below.